The Bush Caractère is a gentle and, rounded beer with plenty of a character and body. It is important to pair it with a dense cheese that tastes full in mouth, such as the Pavé Bioferme.

This strong and tasty cheese is characterized by its pronounced and nutty flavors. The powerful Bush Caractère Refermentée is the ideal match. Cheese flavors are re-enforced by the touches of nuts, malt and caramel in the beer, and the subtle balance between this sweet/bitter beer and the powerful cheese make this pairing look like a feast. 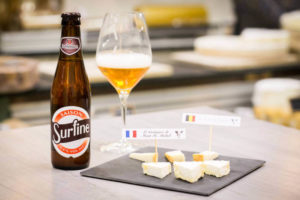